In the past the confession boxes in St. Mary’s were just inside the church at the corners near the main entrance.  Many’s a penitent had to decide whether to join one of the long queues inside the far doors or stand in the rain in the shorter queue which went in through the porch to the nearer doors. Joining the outside queues meant that you got away more quickly – and on a winter’s day perhaps you had part of your penance already done!

In the late nineteen twenties on Saturday afternoons, Fr. Paul McKenna, on his way from Limavady to hear confessions at St. Finlough’s, heard confessions on the roadside along the way! One parishioner remembers well his father meeting Fr. McKenna and his kneeling down there and then for confession as was his custom.

In 1932 in a storm, the stone cross above St. Mary’s sacristy came crashing to the ground. A new iron cross weighing 690kgs was erected by Dan McLaughlin, the blacksmith whose forge was at the corner of Irish Green Street and Rathbrady Road.

A hundred years ago when clocks weren’t so accurate the bell of St. Mary’s Church was an important timekeeper. People listened anxiously for it at 7.30am and in the evening, people working in the fields were glad to hear it at 6pm. On a Sunday morning, as far away as Ballykelly, it could be heard   signalling ‘it’s time for Mass’. On one memorable occasion the bell was rung one morning at 6.30am by mistake! Anyone with a watch or clock presumed it to be wrong and there was great panic in the town that morning. One poor milkman is reputed to have nearly killed himself and his horse trying to make up for lost time!

In the 1920s up to the late 40s on Sundays, from 10.40am until the start of Mass at 11am, the pupils of Termoncanice Boys School were to be found at the front of St. Mary’s on the left hand side while the girls were on the right. Master McCullagh quizzed the boys on the catechism while his wife took the girls. The Notre Dame de Missions nuns from the convent on Irish Green St. conducted meetings for the children in St. Agnes’ Guild on one Sunday each month. The girls wore red ribbons and had an annual excursion to Magilligan. The photograph shows the members of the Guild in 1947 with Fr. Anthony Doherty P.P. 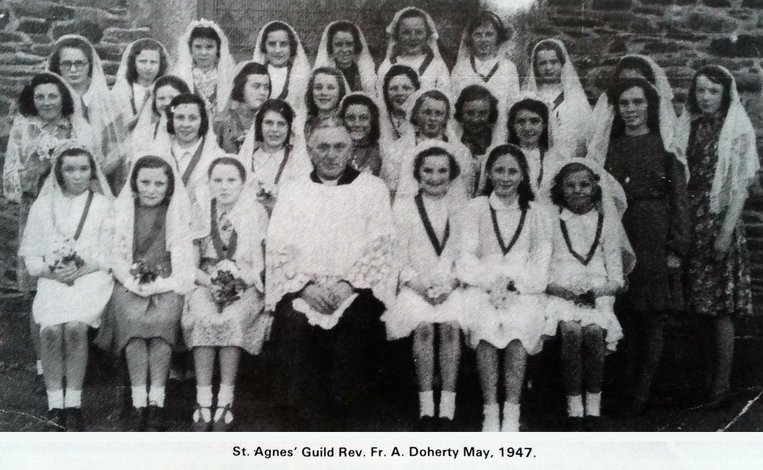